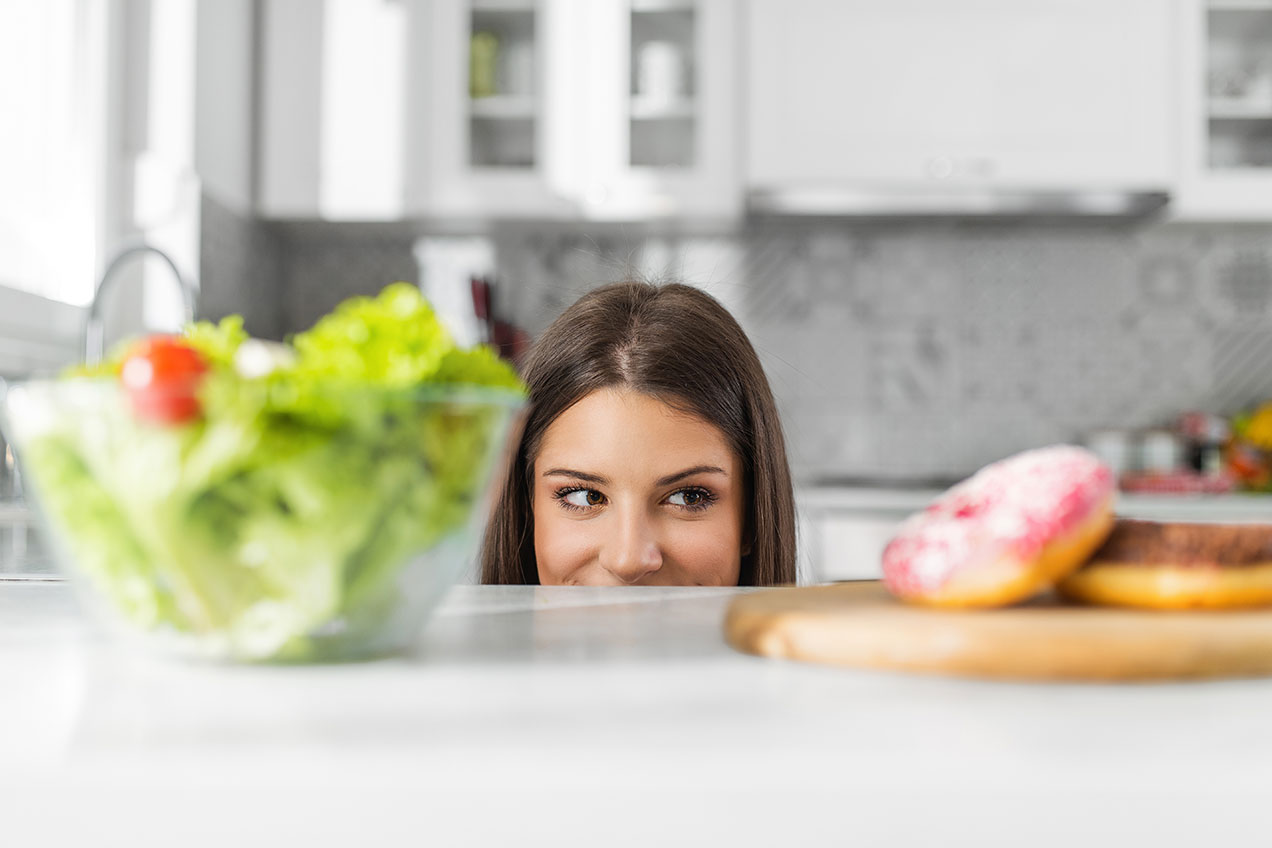 Fed Up with Food Cravings? Here’s How to Beat Them

With dreaded swimsuit season just around the corner, people everywhere are making a commitment to get rid of those extra pounds that piled on during the Winter season.Yet, as we all know, even the best intentions can be easily derailed. Especially when we can’t kick the urge to sink our teeth into a chocolate glazed donut or down a 1,000 calorie mochaccino.  Sometimes it feels like no matter how hard we try to push those urges aside, they always win out in the end.Meet food cravings: a powerful weight loss enemy.As a brain and cognitive scientist specializing in the psychology of eating, I’ve devoted a lot of time to the study of cravings. Historically, the mechanism of cravings served us. In lean times, being able to activate a drive to eat that was so powerful we’d literally swallow bugs, kept us alive.  But now that same part of the brain is telling us we’ll die without a moccachino. What happened?What happened is the food we eat. The current global diet is excessively high in sugar and flour.  And what most people don’t know is that consuming that much sugar and flour actually changes the brain, rewiring it to ensure that it will continue demanding more and more of them.The problem is, our brains and bodies evolved to survive crop-fails and droughts, not process the steady fix of empty calories we’re getting. Today’s packed, processed, refined foods are received by the body as drugs, not as fuel. In fact, brains scans have shown that the brains of obese people have sustained more damage to their pleasure receptors than the brains of drug addicts. This damage is the root of cravings.

“Today’s packed, processed, refined foods are received by the body as drugs, not as fuel. In fact, brains scans have shown that the brains of obese people have sustained more damage to their pleasure receptors than the brains of drug addicts.”

When the brain is overstimulated it turns off pleasure receptors in a process called “downregulation” so they won’t respond as strongly next time. Meaning that to feel the same level of pleasure, you need more of the stimulus next time. That’s addiction. And it only takes three weeks of consuming the average American’s daily load of sugar, 22 teaspoons, for the brain to start making these adjustments.  So when you start to try to lose weight and take your brain off its drug of choice, it’s going to demand a fix.

Yes, brain science has proven that food addiction is very real, and likely hundreds of millions of people are affected. But swimsuit season is still lurking. What can we do to resist those cravings when they start to tug? The good news is that science has some answers for us.

Remind ourselves why the cravings happen

It’s not real hunger, it’s your brain in the grips of downregulation. This reminder alone can help us rise above the cravings.

I’ll sometimes brush my teeth, because that flavor or scent of peppermint has been clinically proven to kill hunger that isn’t rooted in the body’s genuine need for fuel.

Go for a walk, do laundry, read a book. Even healthy food prep can be a good distraction until it passes.

Practice an attitude of gratitude

When I take sixty seconds to run through everything I am grateful for it shifts my brain away from what I want to what I have.

There are also ways to help prevent cravings from setting in:

They are as addictive and harmful to our brains as cocaine and other powdered drugs. The more we eat, the more we’ll crave.

A steady schedule of three meals a day at regular mealtimes—breakfast, lunch, and dinner —trains the brain to eat the right things at the right times and to pass up those wrong things we might crave in between.

Above all, cravings are an important thing to look at, because they are a symptom of a hijacked brain.  One of the many joys of cutting those foods out of my life fourteen years ago is that I went from having daily cravings, to weekly cravings, to monthly cravings, to rare cravings. So, if you feel like cravings are a daily part of your life, that is a sign that big changes, along the lines of eliminating sugar and flour, might be in order.

Finally, if you’re in a weight-loss phase now, and your brain is demanding the foods you are trying to wean off of, just be patient. Treat your craving brain like a tantruming toddler. Distract, deflect, but don’t give in.

Susan Peirce Thompson, Ph.D. is the New York Times bestselling author of Bright Line Eating: The Science of Living Happy, Thin and Free. An Adjunct Associate Professor of Brain and Cognitive Sciences at the University of Rochester, Susan is an expert in the psychology of eating. She is President of the Institute for Sustainable Weight Loss and CEO of Bright Line Eating Solutions, a company dedicated to sharing the psychology and neuroscience of sustainable weight loss and helping people achieve it.